I burst out of the 100 wing door this morning with my arms stretched out wide and yelled “Good morning, world!” to the campus at large.

I’ve gotten several emails that have made me laugh already today.

Rachel is going to make french toast for breakfast.

For all these reasons and more, I’m doing another giveaway! 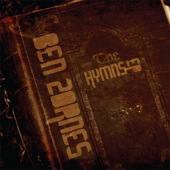 I’m so excited about this CD and this giveaway! And no, it is not just because I’m in the background vocals. ;) Although, Mom does insist that she can pick out my voice specifically–I disagree.

Ben Zornes is on staff here at Ellerslie where I work, and his music has blessed me so, so much. This CD is his Hymns EP, and I have so enjoyed listening to it. He’ll be coming out with a full album with some of his original songs later, and when he does, I’ll do a giveaway with that, too. He ranks up there as one of my favorite song-writers…and it’s not just because I work with him every day! In fact . . . shouldn’t working with someone every day have the opposite effect? That’s how awesome Ben is. I know you’ll love this CD–but if you get the chance you have to come to one of our times of worship in person . . . it’s so much better live. But, the CD is the next best thing!

So, two of you lucky readers (if you comment, subscribe, share, etc) will be getting a brand new CD! Again, the reason I’m so excited about this is not because I’m in the background vocals, but hey . . . it was my one moment of fame.

I think perhaps I shall have a different way of deciding when the giveaway is over this time–although I still can’t imagine that it will run for more than a week. It’d sure be fun to break some records on my Wee Little Blog, though. Records such as…amount of views in one day. Or most comments on one post. Or subscribers. Or something. Wouldn’t that be fun? So, I may pick something such as that, and when it is reached, I’ll draw the winners. Or, I’ll just get too excited and say “The giveaway will be over in FIVE MINUTES!!!!” And then I’ll draw the winners. I like living life on the edge like that.

Also! These CDs are signed copies. Signed by the one-and-only Ben Zornes himself.

(If I can get my hands on them, I’ll post some other pictures that relate well to this post later… :) )